Things to consider before becoming a home loan guarantor 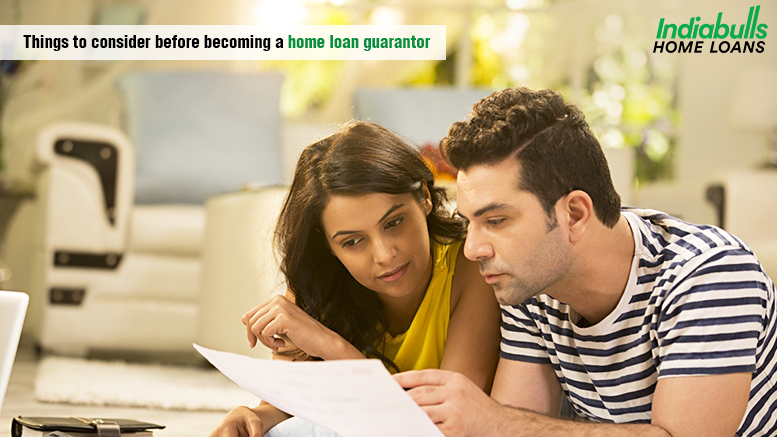 Things to consider before becoming a home loan guarantor

Buying a home is a major financial decision. Having a property of your own can prove to be an invaluable asset. However, with the rising property rates, most middle and lower income groups usually have to rely on banks and housing finance companies to help them acquire the property of their choice. They need to take out a loan and repay it in equated monthly instalments over a period of time by paying an interest on the principal amount acquired. The lender also expects the borrower to follow certain terms and conditions of the loan. In several cases, lenders ask borrows to enlist a guarantor on the home loan. Let’s understand the role of guarantor in home loan and factors to keep in mind before you sign on as someone’s guarantor.

What is a guarantor home loan?

Lenders require borrowers to enlist a guarantor, typically in the case of high value loans. Such loans are known as guarantor home loans. In such cases, the guarantor is the person guaranteeing that he/she would repay the borrower’s debt if the borrower defaults on his/her loan obligation. The guarantor serves as the co-signer in the loan, pledging his/her own assets in the event that the borrower doesn’t repay the loan. Guarantors also serve as character certifiers for the loan applicant.

To be eligible as a guarantor, one has to be over 18 years of age, a resident of the country where the loan is being taken and also have sufficient income to pay off the home loan, should the need arise. If you sign on as some-one’s guarantor, you are contractually bound until the entire loan is paid off. While the borrower can serve as his/her own guarantor in case he/she has another property to pledge, most banks and housing finance companies require borrowers to bring on a third party guarantor.

What is the role of guarantor in home loan?

Things to consider before you become someone’s guarantor

Having covered home loan guarantor rules, let’s look at the factors to consider before you sign off as someone’s guarantor on a high-value loan like a home loan.

Know the obligation of being a guarantor: Financial guarantors are obligated to pay the outstanding loan amount and other dues if the primary borrower defaults. You should note that you could be listed as ‘wilful defaulter’.

It can affect your own loan eligibility: Another factor to consider before signing on a home loan guarantor is that if the borrower defaults on repaying the loan, not only does the onus of repaying it fall on you, but it also affects your credit scores and your finances. Moreover, if you, the guarantor, need to take on a loan sometime in future, your eligibility may be considerably reduced and you may not be found eligible for the loan amount you actually needs.

Final thoughts: So, before you sign on as a guarantor for someone’s home loan, it is better to remember that the role of the guarantor in home loan is much more than what meets the eye. There could be several repercussions including the fact that one could expose their own assets to risk. It is therefore recommended that you do not sign on as a guarantor unless you know the borrower properly.