The Impact of Demonetization on Real Estate in India 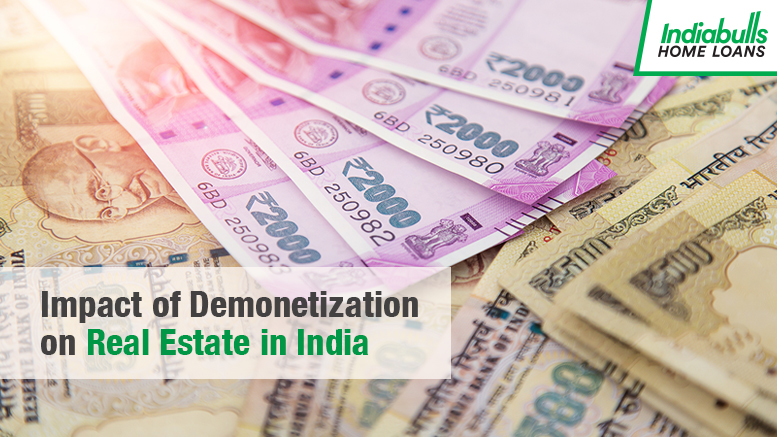 Black money is a plague that has thrived within the Indian economy for ages, and the recent demonetization of the economy by the Modi Government is a rough hand that will hopefully act as a remedy to this national scourge.

The effectiveness of the move is a matter of heated debates all over the world, with the answer still remaining inconclusive. There are certain sectors of the economy,however, which stand a strong chance of benefiting from the same.

The Indian real estate sector is one of the most effective means of converting black money into white. However, the secondary sales market will have the highest impact where cash transactions are a norm,and investments into multiple projects across the country havebeen made using black money. In most cases, one-third of every transaction involves the use of blackmoney, where the actual cost of the property is much higher than the legally documented cost. This has for long been one of the most common means of tax evasion.

Another important segment that will take a hit due to the latest norms is the luxury and high-end property segment.This area also sees a lot cash transactions being made. According to the latest estimates, the prices for properties in this segment areexpected to fall by 25-30%, as the seller tries to offload property, so as to generate more liquidity. Hence this might just be the best time to invest in this segment.

The real estate segment in Tier 1 cities in the country will remain largely unaffected though. Projects that are being undertaken by reputable and credible builders in the Primary Market,use legal channels to fund their projects. Since Home loan and finance routes are the main sources of funding for these groups, this segment will remain largely unaffected. Tier 2 and 3 cities will see turmoil even in residential real estate. This however, is expected to settle down in the short run.

Instances of investors investing in projects with black money and raising prices to make increased profits will also come to a rest. Hence the market price will hopefully reflect the true price for real estate properties, and not an inflated price tag.

Demonetization is also expected to bring in a much needed transparency to the real estate segment and make it more organized. Curbing cash transactions will serve as the first step taken in this direction.

Demonetization was always been a wild card. A risky move that just goes to show that the Modi Government is playing things close to the chest. Widespread unrest and inconveniences will prevail in the short run and are the means to an end that will hopefully be a more productive economy over the long haul. For the real-estate sector however, it is expected that people won’t have to wait as long to see positive results of demonetization emerge, as is the case for the rest of the economy.

The post The Impact of Demonetization on Real Estate in India appeared first on Indiabulls home loans.

The many benefits of the RERA Act

Buying a home is a big deal for everyone. It is a high value investment and the buyer has to think beyond just the property rate. Add to that the fact that the builders had the discretion to frame the builder-buyer agreement as they deemed fit.

MCLR vs Base Rate

When it comes to home loans, every borrower wants to ensure that he/she can get the lowest possible interest rate. After all, the interest rate determines the monthly EMI and the loan tenure.

If you are a salaried individual, you should pay special attention to how your salary is structured as you can get a lot of allowances for tax exemptions.